Topic: Baby it's cold outside

Meet others in this age-range who share similar life issues. 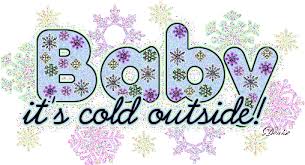 Here is a place we can talk about the weather and enjoy whatever else comes up in conversation.  Weather is always a good ice breaker.  Grab a cup of hot tea or cocoa and pull up a chair.I'd rather hear from those who are living the weather rather than the weather-guessers.

I know just how popular the weather can be...You have my endorsement.

You need to tell us what your weather is like, Elimar?  I don't think I even know what part of the country you are in.

Thanks for starting this, Meece.  I had forgotten elimar's request too, and am just as guilty.  Weather is a major topic in Maine this time of year, it can change so much so fast. . .

I always love listening to people from Maine talk about the weather.  I love your accents and it just flows when speaking of the Nor-Easter (?).  I have a good friend over in wine country who is from Maine.  She traveled back there a couple of months ago to see about buying a vacation property.  She was a bit disappointed when she returned here, she says she just can't go back because things have changed so much.  I don't think any of us can really go back, we are women who move forward!

So raining in Maine

As the day has passed, it has become partly cloudy here.

Meece.... You're positively devilish. I can report the first flakes of a new storm are just falling... We are on the road to a favorite party... They are predicting a few inches. Fun funfun!! Thank ggodness I didn't report such nonsense over at E's house. LOL

So, Faithy has a bit of snow in Ohio.  I sure hope you can get home from the party.

I think that is what I miss in the winter (for a short time) the snow and cold.  Today is cold at 48 deg. but it is so nice to enjoy the sunshine w/o the heat of summer, which can be a bear here!

I have also wanted to visit Main the pictures make it look so beautiful near the water.  I feel like it would be so calm to leave there.  What is it really like?

Sunny and cold in Texas.

I saw pictures of the property my friend had gone back to see.  It was beautiful.  Sort of foresty.  I think I will develop special weather and country language which will be totally acceptable here, my first entry will be foresty.  NativeMainer, is that an acceptable description of Maine, or at least parts of it?

Hey, now this looks like an interesting group. I think I was really born to be a meteorologist. I always LOVED weather, watching radar screens, highs, lows etc....Highs today were in the 50's and sunny. Hope you all have a great evening!

We'll have to guess where you are from, Coonie. Hmmm a bit warmer than Texas, Let's say today you are in Northen New Mexico.  Okay, the weather in Northern New Mexico has been sunny and in the 50s today.  An occasional breeze has made it feel a bit cooler.

Actually that really looks like Waimea Canyon on Kauai, but I will take Weather reporter's license, cuz it's pretty!

Oh, my would it be..Alabama?  Mississipi or Louisianna?

Are we playing the Rumplestiltskin game?

I love this idea.  My dad was the weather guru of the family.  Watched the Weather Channel and then would call all of us around the country to tell us what our weather was.  He died 5 years ago and I've taken up the call.

Here is Tampa the weather was cold for us today and overcast.  I have a small fire and enjoying it.

Thank you to everyone who is participatin on our first day of "having weather" here.

Tampa and Orlando, Florida in the 50s and overcast:

Out past curfew!! Party much more intimate this year due to elements. Let's hear it for four wheel drive. We ceertainly have the predicted three inches.

Two weeks till I shift addresses to Ocala FL!!! (Last year we had a lunch with 12 BCO gals!! In ocala. Stay tuned!!)

Are you a snowbird, Faithy?  Since I don't have a year under my belt here at BC.org, I have to get all the scoop.

We got an update from smithlme in Ft. Bragg on another thread, CA that today they are experiencing high fog and cold!  The fog we have here is called "tule fog" (pronounced /ˈtuːliː/) You can look it up on Wikipedia.  It sits very near the ground and make driving extremely dangerous.  It took about 25 minutes to drive 14 miles this morning with no traffic.

Good morning from Central Maine!  Got about 4 inches of wet snow overnight, everything is covered with snow and the breeze is just starting so it hasn't started falling off the wires and branches yet.

What's it like to live in Maine?  Depends on where you are.  There's southern Maine, from Portland to the border, affectionately called "Boston North" becuase of it's heavy (for us) population concentration.  I'm told it's a very urban lifestyle.  Coastal Maine is very pretty, usually quiet except during tourist season.  That's where I grew up and I miss ocean fog--river fog just doesn't smell rgiht!  Life can be hard in the coastal regions--fishing is the main source of employment and is not the safest job in the world.  It also makes for uneven income.  Central Maine is mostly rural, generally quiet, mostly winter  tourism dependant (skiing, snowmobiling)  Some very good educational facilities (University of Maine system, Husson University, Colby College, an extensive Tech Center/community college system).  Northern Maine, aka "The County" referring to Aroostic County, is very, very rural, and primarily agricultural.  Many of the "Idaho" potatoes used in chips and fries come from Aroostic County.  Idaho Potatos are a type of potato, like Yukon Gold.  In the middle of the state is a huge park surrounding Mount Katadin.  Lots of camping, kayaking, canoeing, snow shoeing, hiking, and other 'wildland' activities.

Maine runs about 5-10 years behind the curve in just about everything from medical care to fashion trends.  Most of our air pollution gets blown in from the west of us.  Independance is a way of life, almost a religion.  And there are 3 major Maine accents:  coastal, tourist trap, and everywhere else!

Thank you so much, NativeMainer, for enlightening us.  I guess I know of the tourist trap accent.  Funnything is people ask me where I am from because I supposedly have an accent.  I usually speak "precisely" and pronounce all syllables, so that must be an accent.  I have thought about inventing a european country that I could tell people I am from.

I was born, raised and will probably die here in the San Joaquin (pronounced wah-keen) Valley here in Central California.  It is not the picturesque vision of California unless you enjoy loooking at nut and orange orchards, fields of cotton, potatoes, tomotoes, lettuces, melons, alfalfa, corn to mention a few of the crops we have here.  We live near an area that specializes in roses for bare root plantings.  Frito-Lay has a facility nearby, as does Dreyer's Ice Cream.  Oh, the dairies, mega dairies!  With a milk cow here, and a milk cow there, here a cow there a cow.  I grew up in the heart of oil country.  I used to know a lot about oil production, in fact I lived for 19 years on an oil lease.

So that's my first installment about the county I am from.

It is clear now, at 5:30 am, but the fog is due in soon.  It never completely burned off yesterday.  We are due a bit of rain tomorrow which means the fog will return with a vengence by Thursday.

Meece - all you had to say was Breyer's ice cream and I'm there!

As you probably all know, the Washington, DC area got hit with almost 2 feet of snow - thank goodness it is almost gone now (thanks to the warmer weather and rain).  Today it is just cold and windy.  We generally don't have a lot of weather but we love to talk about the weather we get!

Kathleen, It may sound the same and in my opinion tastes the same, but it is Dreyer's Grand Ice Cream.  I wonder which company came first.  I actually had to look it up before I posted because I couldn't remember for sure B or D.

Washington D.C.  I would love to visit there someday.  I am a museum/history lover.  So, did you have to be home bound for awhile in the snow?  We got enough snow here several years ago that our schools were closed, and nobody could go anywhere.  We have no plows and are ill prepared for snow.

Here is DC weather for kmccraw:

And sunny Orlando for hmm, but you can tell it is cold!!! (Sorry I am having technical difficulties putting Orlando in here.)

We have overcast and 49 degrees here today, a small storm is suppose to come in tonight.

well here in Folcroft outside Philly it is 28 cold degrees and the wind is blowing and my trash cans have rolled away or someone has taken them like about 6 months ago, how do you take someones trash cans, lol!!  Oh and would rather be in Orlando no matter what the weather is.