I'm a gender critical radfem so I'm not quite on board with your definition.

Feminism is a messy place my friend :)

I take weekends off

Initial dx at 50. Seriously?? “Sometimes the future changes quickly and completely and we’re left with only the choice of what to do next." blog: Never Tell Me the Odds

Olympic sprinter Allyson Felix and her sponsor Athleta have created a $200,000 childcare fund for athletes competing this year.

When we marvel at female athletes beating world records at the Olympics, few of us stop to ask: Who's watching their kids right now?

Allyson Felix, the most decorated track and field Olympian in history, knows exactly what it's like to be worried about childcare while she's training and competing. So this week, she announced a partnership with her primary sponsor, Athleta, and the Women's Sports Foundation to launch a $200,000 grant aimed at covering childcare costs for professional athletes competing during 2021. Nine athletes have already been chosen, including Olympic hammer thrower Gwen Berry and Olympic saber fencer Mariel Zagunis, each of whom will receive $10,000.

Over the past two years, Felix has become one of the most vocal advocates for female athletes. After Olympian runners Alysia Montaño and Kara Goucher broke their nondisclosure agreements with Nike to share how poorly the company had treated them while they were pregnant, Felix stepped up to do the same. In 2019, she described in a New York Times op-ed how she tried to push back against Nike's policy of cutting female athletes' pay during and after pregnancy. When Felix asked Nike to guarantee that she wouldn't be punished if she didn't perform at her best in the months surrounding childbirth, the contract negotiations ground to a standstill.

"One of my first races back after giving birth to my daughter, Camryn, was the World Championships," Felix tells Fast Company. "Not only was I still breastfeeding and physically and mentally exhausted from being a first-time mom while training and competing — I was assigned a roommate at the competition. There was no way I could bring my daughter into a shared room with another athlete who is trying to get in her zone."

A few months later, Felix signed a sponsorship deal with Athleta, Gap Inc.'s activewear brand. "They get that I am a whole person beyond the track," Felix says. "They jumped right in to support my training as well as my passions and advocacy platforms. In fact, part of my contract with Athleta includes provisions for Cammy to join me whenever I am competing. "

But very few athletes have this kind of support from a sponsor. Felix wanted to establish this grant program so that other mom athletes could get childcare support as they compete at the highest levels. The Women's Sports Foundation, the organization founded by tennis legend Billie Jean King in 1974, will be responsible for allocating the $200,000. Athletes from all sports can apply for a $10,000 grant through August 31, and all recipients will be announced in October. Given that most athletes headed to the Olympics don't have big sponsorship deals, a grant like this can make a big difference.

Lora Webster, a 34-year-old Paralympic volleyball player, is among the recipients and plans to use the funds as she heads to Tokyo. Webster has three children, ages 6, 8, and 10, and says she has struggled to balance her responsibilities as a mother and an athlete. She's traveled around the world to compete, from the Athens and Beijing Olympics to the Volleyball Masters in the Netherlands to the World Cup in Egypt. At the London Olympics in 2012, she didn't tell her team that she was 20 weeks pregnant. "I didn't want them to worry that they could do anything that might harm the baby," she says.

But she says traveling to sporting events for weeks at a time with three kids at home is just as challenging as competing pregnant. Her kids miss her and she feels like she's abandoning them. Then there's the sheer cost, particularly since Webster doesn't have a major corporate sponsor. She and her husband have had to pay thousands of dollars for babysitters while she's traveling. This year, she has one less thing to worry about. "It's not an exaggeration to say that this grant is life-changing," Webster says. "It's not just the money: It's that big companies are now beginning to understand what the struggle really is for mom athletes."

Webster says that she's spent most of her life carefully separating her identity as a mother from her identity as an athlete. She rarely talks about her children when she's training or interacting with her teammates because she's concerned it might make her look weak. "As moms, there's so much guilt leaving our babies at home to pursue our sport," Webster says. "It's something we can't really talk about, because it makes us look like we're not focused on the game."

Felix wants to break that code of silence. As she heads to Tokyo as one of the top track and field athletes in the world—with six Olympic gold medals and 11 world championship titles—she's using her clout not only to advocate for herself, but to start a conversation about what it's like for professional athletes who choose to become mothers. "These grants are about showing the industry that all mom athletes need this same comprehensive support to be able to participate in their athletic endeavors," Felix says.

And for Webster, this means a lot. "I'm floored that she has made this a priority," Webster says. "It sends the message to all female athletes that we don't have to choose between motherhood and our sport. We can do both."

Elizabeth Segran, Ph.D., is a senior staff writer at Fast Company. She lives in Cambridge, Massachusetts

The Australian custom doll maker creates breastfeeding Barbie dolls in a bid to show that nursing is just a typical part of life. 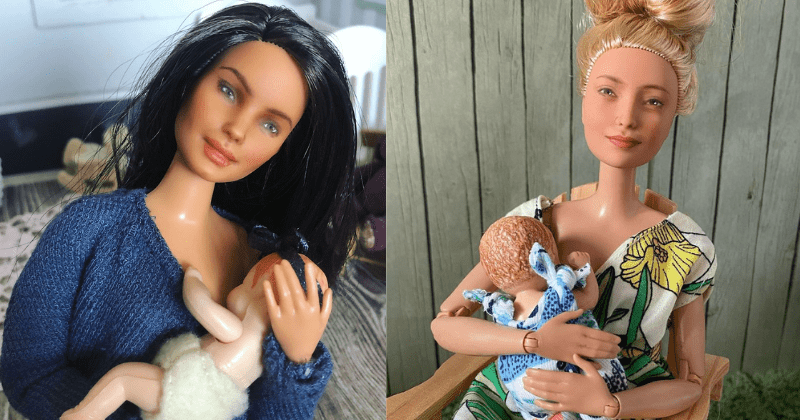 Stay-at-home mom and custom doll maker Betty Strachan firmly believes that the key to erasing the stigma around breastfeeding is education. "It's a completely natural and normal thing to do. There's no other way to put it," the 28-year-old told PEOPLE of her efforts to help the Normalize Breastfeeding movement. "Women were given the amazing gift of being able to carry and nourish children and being shamed for doing so is just wrong." In a bid to show that nursing is just a typical part of life, the Brisbane, Australia, native came up with the idea to create a breastfeeding doll for kids.

Strachan, who is a mother-of-three, revealed that the idea came to her when she started modeling dolls after fellow moms from her parenting support group. "The decision to make a breastfeeding doll didn't come consciously," she told The Huffington Post. "I'm a member of a mothers' group that's comprised of very lovely and supportive women. I remember one day, I was drawing the new face on a Barbie doll, and she just seemed to be the embodiment of the entire group. So I mimicked the positioning of a latched baby with an old figurine I had and called her the 'Mamas Worldwide Barbie.'"

moth, I intentionally used the phrase "general definition" because I know it can mean different things to different people. The definition given is taken from a website. I also included this: "Please honor the spirit of the thread. It's not for opposing views. The intention is for those of us with similar views on feminism to have a space to gather, share insights and find support.' If you have differing views, this thread isn't for you.

I suppose I’m a feminist under the definition in the topic post, however, I don’t really identify as such. Personally, I’ve found a lot of feminist voices (mostly online) tend to be hateful of men generally and if I hate, it’s absolutely on an individual basis. I’m fortunate to have not dealt with much gender discrimination, other than the car salesman talking to my husband, who quickly stops them and clearly states that I am buying the car. But I’m here with you all :)

illimae, there are many voices of feminism. Contrary to popular belief feminism has nothing to do with belittling men. In fact feminism does not support sexism against either gender.

May I just say, I have a Dad (who's passed), a husband of over 30 years, a son, a step-son, a grandson and a bunch of nephews as well as friends and neighbors who are men, and I don't hate any of them!

Your definition of feminism is not the only definition. You are making very broad statements about what feminism is and isn't but you don't own that word. Are you saying you're only wanting to hear about feminism that is totally aligned with yours? Because I don't think it's fair for one person to say "this is feminism please don't disagree with me"

I take weekends off

Initial dx at 50. Seriously?? “Sometimes the future changes quickly and completely and we’re left with only the choice of what to do next." blog: Never Tell Me the Odds