Topic: The 'Journey' has begun!!!! aka Chrissyb's USA Adventure!!!

A place for members, in similar geographic areas, to connect for support, local resources and referrals as well a place to meet up within the community virtually.

As the title says, I'm on my way!!!  I will use this thread to update all of the goings on over the next six weeks until I return home.  I will be posting pics also from time to time so everyone can travel with me.  First instalement tomorrow from London as my laptop battery is about to die.......I knew I'd forget something!!!!!!

Oh Chrissy, I can't wait to meet you!

Chrissy - I'm so excited for you. Would love to make a trip like yours.  I just wish I didn't panic so at the thought of flying So I could meet you on one of your stops. Enjoy.

Chrissy right now you are winging your way from Singapore to Heathrow I imagine you're sitting watching movies, reading magazines and eating airline food it's a lonnnnng 13 hours flight but it's bringing you closer to your BCO pals and we're all so excited, wooohooooooooo!!!!!!

Hope you have the best trip ever , Crissy

After a few interuptions on the way to the airport, I was finally on board the biggest plane in my life!!! and set for the journey of my life!!!    Having never travelled on a big plane I was very surprised at how comfortable they are and how quickly it lifted off.........I didn't even feel the body being pressed back into my seat as it lifted off!   The young Hostesses (is that the right term?)  were absolutely lovely and were very attentive.  It seemed like the whole trip we were being given water and other drinks, food and snacks and lovely hot towels to freshen up with........could you say it was heavenly?   Oh yes, I can definitely say that.  It was twilight when I reached Singapore and it had been raining so it was a little overcast, but that first sight of the end of the Peninsular where Singapore is situated was beautiful.  I could see the rivers and landscape below me and my excitement, already at an all time high, began to climb to new heights.  It seemed like no time at all and it was time to disembark and I was met but a lovely young woman and aided to the lounge area where I spent the time before the next flight.  On the way through the terminal, this is what I saw 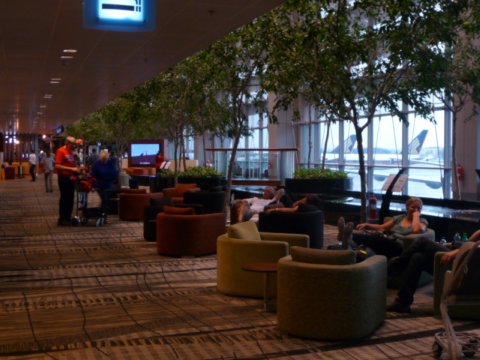 This is on the throughway to the main floor.

This is from the same place and that is the plane I just arrived on. 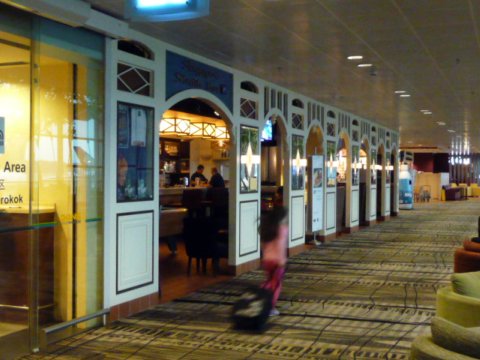 One of the many Bars that we passed. 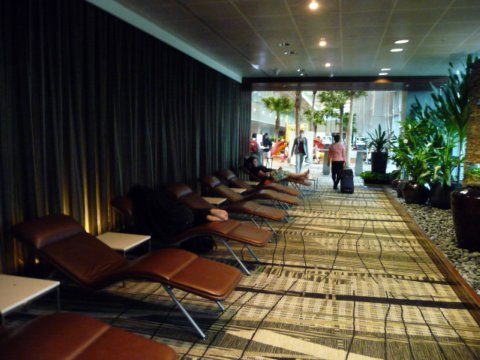 These loungers are in lots of places and are put there for travellers to relax on while waiting for flights.

And this is the food area of where I spent my time waiting.

My impressions of Singapore?  If it is a good as the airport, I want to see more!!!!  The main floor of the airport, beside having all the things to do with travel, has some of the most amazing shopping I can ever recall seeing!

Oh well my time there was short and sweet so it off to London and on with the sites!!!

Thanks for all the well wishes, I'm having a whale of a time!!!

Chrissy,  I like those loungers.  I have not seen them here.

Hi Chrissy! I'm just so excited for you. At this point you have only traveled, but reading of your journey so far has brought tears to my eyes! Can't wait to read more, and see more pictures. This is definately going into my FAVORITES.

I gotta say tho, that lounge has got nuttin on THE HTL!

Have to agree with Goldie the HTL really kicks that ones A$$....lol....I know Dork is on pins and needles waiting to meet you, sure wish you could have come on up to Canada

Yay, this is only the beginning of Chrissy B's Big Adventure. Beautiful pictures, so nice to see you started a thread!  Your bed is ready!  I will be at Terminal A at 3:45 Eastern time with a big CHRISSY B sign, yippee, here is a toast to you.  clink clink, CheerZ.

Oh My you are even sending pictures! Aren't you clever! Love to see all that! You are so amazing and brave!!! I'm excited for you just reading and seeing the pictures!!! Have safe travels!!!  Cheers!!!!

WELCOME TO THE GREAT US of A CHRISSY!

Well we're ready for you in Jersey Chrissy! DorK I have no plans on Monday if you guys want to meet up before dinner. Hauntie is driving down from NY and I told her I'd meet up and do the driving to give her a break.

After a very long all night flight from Singapore, I finally arrived at Heathrow Airport, London!  Wow, what an airport!!!   It's humungous!!!!!  Just to get from the entry gate to the customs area was about a fifteen minute walk and then I had to stand in line to go through the usual security checks etc before I could move through to the greeting area.  There waiting for me with my name displayed on a card was the driver I have booked to pick me up and take me to my hotel.....so, even though he was pushing the cart with my luggage, it was still a trek to get to the private car park where he had parked......did I mention that this place was humungous?..........I felt like I had done a walking marathon just to get to the car......thank goodness I didn't have to drive too!

This is just a portion of the terminal I was in and there are three!!!

Even though it was by this time only 7AM, the traffic was already beginning to back up on the M4 which is the main motorway into the city itself. 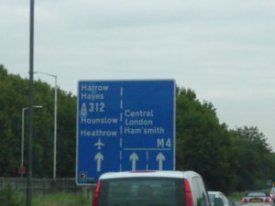 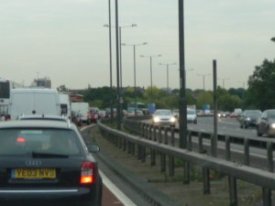 On the way to the hotel, my driver gave me a good tour of a lot of the everyday London and it was very interesting, seeing the different eras of the city by it's architecture and seeing the old along side the new where they are now expanding to make more living space.  London is now a city of 10,000,000 people and it shows.

This was my first glimps of the famous double decker red buses of London and they truly are a site to behold! 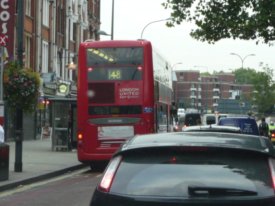 After arriving at my hotel and getting settled, I freshened up and headed for the city where I took a bus tour of the well known land marks of London.  The bus on which I travelled was on old double decker bus that had been converted to make the top open to the air and the most perfect view imaginable.  I saw the marble arched gate way to Hyde Park,

The beautiful fountains of Trafalgar Square,

and a whole lot of the beautiful historical buildings that have been built to replace the detroyed ones of the Great Fire of London in the 1600's.  It is amazing to think that when London was rebuilt after that disaster, they literally followed the streets as they were and did not widen them at all even though that would have been a perfect time to do it.  The most dominating building in the whole of London I think, is the glorious Cathederal by Christopher Wren.  Where ever you are, you seem to be able to glimpse that dome of that wonderous building!

The tour on the bus finished at the famous Tower of London.  I always pictured in my mind that this building was like the castles of fairytales, you know huge high walls with turrets and battlements etc? well the reality is, even though it is a castle and the walls are high, it is not as imposing as I though but none the less amazing and capable of invoking the imagination to run wild as you put yourself in the place of the young Queen Elizabeth 1st as she was taken to the tower through the Traitors Gate on the Thames and escorted to her prison cell or the fate of her mother, Anne Bolyn who was imprisoned and beheaded by a cruel selfish King.

To complete this day, I journeyed back to Knightbrigde and to Harrods for an exquisite afternoon tea of cucumber sandwiches and little cream cakes..........it was truly decadent and delicious!!! 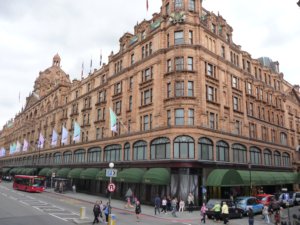 By the time I had finished, it was time to make my way back to my hotel so I decided to try the London underground!  Wow!  what a ride!!!!!  Very fast and efficient way to travel in London, and to top it off, not realising how far down the road I had to go to get to my hotel, I rode a modern, red painted double decker bus which stopped just outside the door to my hotel.  By this time it was 5.30pm.  I had had a very long exciting day and after a shower and food I headed to my bed and even though it was only 7.00pm, it was time for me to sleep!

The second day in  London, I decided to take it a bit easy so after I had breakfast and spoke to my DH and family, I headed to the underground once again and made my way into the city where I spent most of the day in the Victoria and Albert Museum checking out all the exhibits and have lunch and a cup of tea in the most amazing cafe that I have ever been to! 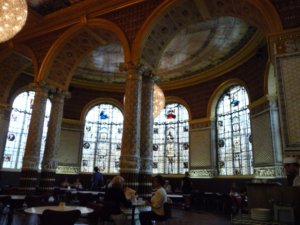 And this is the entrance to the Museum.

After an exhausting day looking at a lot of beautiful things, I headed back to the hotel via the underground and after a little nourishment, a shower and the repacking of my belongings, I was once again ready for sleep and the morning would bring with it the next leg of my journey, the USA!!!!

Chrissy, you are off to a wonderful start on your journey. I'm very excited for you. Please continue to send pics and travelogues -- I enjoy reading about your adventures. Safe trip!!

I'm so excited. I know everyone in the good ole US of A can't wait to meet you

G'day and welcome Chrissy!  Thanks for the pics so we can follow along.  {{hugs}}

Chrissy - Just found this thread. It sounds like you've had the trip of a life time already, and you just started. See you Monday in NJ.

Chrissy, what an adventure you're having! Looking forward to more stories and pictures of your travels.

I just found this thread too, Chrissy.  It's wonderful to finally be in the same country with you!  So glad you're having such a great trip.

Chrissy, so good to have your comments on your exciting trip and meeting so many of our group...sending hugs...SoCal

Yes, Husker, we can meet up early, yay!  Hauntie, looking forward to meeting you too. Have a safe trip.