Meet others in this age-range who share similar life issues.

Gonetruckin - we had a candy store blocks from my home in NJ that we would walk to. I was under 10 years old and after getting our candy, we would go to the elementary school, hang out on the steps, and eat our candy. As long as I was home by dinner, my parents didn't worry.

And playing cards clipped to the spokes of our bikes with clothes pins.

MInusTwo, I loved the way the playing cards made that click, click, click sound on the spokes. Did you try the balloon version? More of a flub, flub, flub.

No I never tried balloons. What a kick!!!

Just got my fall Vermont Country Store catalog. I had a wonderful time looking through all the old favorites. Did anyone else have a Lanz nightgown? I begged for some time in elementary school before I got one because they were expensive (in the day).

I don't remember the Lanz nightgown but I do love looking through the Vermont Country Store catalog! Evening in Paris and Emeraude perfume, pine tar soap, bag balm!

I love looking at my Vermont Country Store catalog too.

Mom makingus either a sweater or a new nightgown for Christmas.

If you value your freedom, thank a servicemember both serving and retired!
MinusTwo Houston, TX Joined: Apr 2011 Posts: 15,256 Latest activity: Oct 25, 2021
Log in to post a reply

I turned down the page for Evening of Paris again this catalog - as I do every time. I rode my bike to Woolworths to get my first bottle after saving my allowance for months. I'd love to smell it again but I just can't justify $59 for an olfactory memory

I’m a Wind Song and Chantilly gal. My paternal grandmother wore those and I have always loved the smell. I have both perfumes.

If you value your freedom, thank a servicemember both serving and retired!
MinusTwo Houston, TX Joined: Apr 2011 Posts: 15,256 Latest activity: Oct 25, 2021
Log in to post a reply

I had to look up what a Lanz was. I had never heard of it before.

But as far as old colognes go (which I know we posted about on this thread probably 50 pages ago,) it is a tricky proposition whether to buy one of those fragrances nowadays. I took a chance on Oh! de London about 10 years ago. That cologne was discontinued, but supposedly some company bought the proprietary formula from Yardley and was claiming it was the real deal. I bought a tiny 1/2 ounce bottle. Well...what a disappointment! It smelled nothing like it. Did my nose change for the worse? Maybe. Or, they just could not make it smell good like it used to back in its mod heyday. Scent memory is very primal. I think I would just weep if I ever smelled this authentic scent again because of the memories I have of it.

I smelled some Emeraude recently a few years ago and that smelled just as I had remembered. My aunt always gave me Chantilly at Xmas. Was not a fan, but now I am kind of nostalgic for it. My mom Wore White Shoulders and Chanel No. 9. A neighbor's dad gave me some Nina Ricci L'Air du Temps cologne that "fell off a truck." Some colognes I wore in my youth were Jungle Gardenia, Muguet de Bois, Coty's Sweet Earth scents, and those essential oils that you could buy at "head shops." Remember that Avon cologne, Hawaiian White Ginger? Not a big fan, but I must have felt sorry for those Avon pushers at least once because I did have a bottle of it. (Side note: Who didn't love those tiny Avon sample lipsticks as a kid?) Charlie cologne had that popular ad campaign, but p.u., my nose never cared for it at all. In the 80's, I was all about Obsession and Opium, and I can still detect someone wearing those scents a city block away.

Check out the ad below. Recognize Olivia Hussey? What young girl wouldn't want to wear the scent that the 60's "Juliet" was advertising? I wish you could read the fine print ad copy. Your young girl self would be totally sold on it!

I still have a very good nose. It's a blessing and a curse.

As a public service announcement , I have to write this to all you women of my age: A certain percentage of you have lost your sense of smell and have no idea how much scent your cologne is giving off, so go real easy on it. Thank you.

Agree about the blessing & curse of a good nose. Mostly I'm glad that I can smell anything & everything.

Thanks for the L'Air du Temps reminder. I wore that most of my high school & young married years. In fact, except for an occasional foray into Channel # 5, the Nina Ricci is the only cologne I wore until I switched to Oscar de la Renta around age 45. But I do still have a very old bottle of a gardenia scent that I need to throw away. Sigh!!!

Good advice about the strength of the scent. I rarely wear anything anymore. And I use Cera Ve lotion and cream that has no scent.

If you value your freedom, thank a servicemember both serving and retired!
elimar Joined: Jul 2009 Posts: 7,361 Latest activity: Oct 24, 2021
Log in to post a reply

Remember when the musk scent was a thing? Jovan had popular ones for both women and men. Oh, and most of you probably remember a cologne called 4711...well, that is not only a middle-aged memory, but a Georgian/Victorian memory because that scent has been around for 200 years!!!

Actually, what I popped back in for today was to share the memory of Trixie Belden, like Nancy Drew, but perkier! My mom bought me a few of the books, including this one with a weird cover. I don't remember the story tho'. 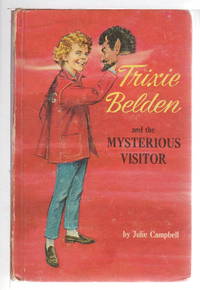 Hi Eil - Great to see you. Hope you are doing OK.

I don't remember Trixie Belden, but wasn't there a nurse series like Nancy Drew?

There was a nurse series of books-- Cherry Ames

I don't remember Trixie Belden. I do remember Nancy Drew and another mystery series, about 2 brothers, the name escapes me right now.

Yup - Cherry Ames is the series my nurse BFF read as a kid. The boys series my brother read was The Hardy Boys, although we had some older books too since that series started in 1927.

minus, how cool to have an inscription in your book so that you can remember when your received it. I loved the Bobbsey Twins books. Oh, my! Those were great. Nan and Bert and Flossie and Freddie, right?

Did anyone have the Boxcar Children? I read them as a child and was fascinated by the concept of orphaned children on their own. Add to that they lived in an abandoned box car and I was transported. They are aimed at children grades 2-6 so I'm looking forward to gifting them to my grandchildren.